GUWAHATI, September 22: Breaking the myth of the medicinal value of rhino horns and send a strong message against poaching and smuggling of rhino horns Assam government on Wednesday burnt 2,479 rhino horns on the occasion of World Rhino Day.

The rhinos’ horns were burned at Bokakhat Stadium Ground in Golaghat district near Kaziranga National Park and Tiger Reserve (KNPTR).

The grand ceremony has been publicized as a “milestone towards rhino conservation” aimed at “busting myths about rhino horns”.

Assam chief minister Himanta Biswa Sarma attended the event as a chief guest. Following his arrival at the Bokakhat Stadium Ground, he inspected the rhino horns ahead of burning the stockpiles of the 2,479 rhinos’ horns in six giant furnaces.

“Today is a historic day for Assam & India. We have taken an extraordinary step of the burning stockpile of 2479 horns of single-horned Rhinos, first-of-its-kind globally in volume terms, pursuing a vision of Hon PM Sri @narendramodi of putting an end to poaching in Assam,” the chief minister said in a tweet.

Today is a historic day for Assam & India. We have taken an extraordinary step of burning stockpile of 2479 horns of single-horned Rhinos, first-of-its-kind globally in volume terms, pursuing vision of Hon PM Sri @narendramodi of putting an end to poaching in Assam 1/2@PMOIndia pic.twitter.com/4SuN0XuCWB

“One-horned rhino is not only integral to our civilization but also a symbol of our prized heritage and identity. We are preserving 94 rhino horns for display at a museum to be set up at Kaziranga National Park. The use of rhinos’ horns for medicinal purposes is a myth,” Sarma said in another tweet.
As many as six giant gas furnaces, each with three tiers were in place to burn the horns which have been preserved for years. 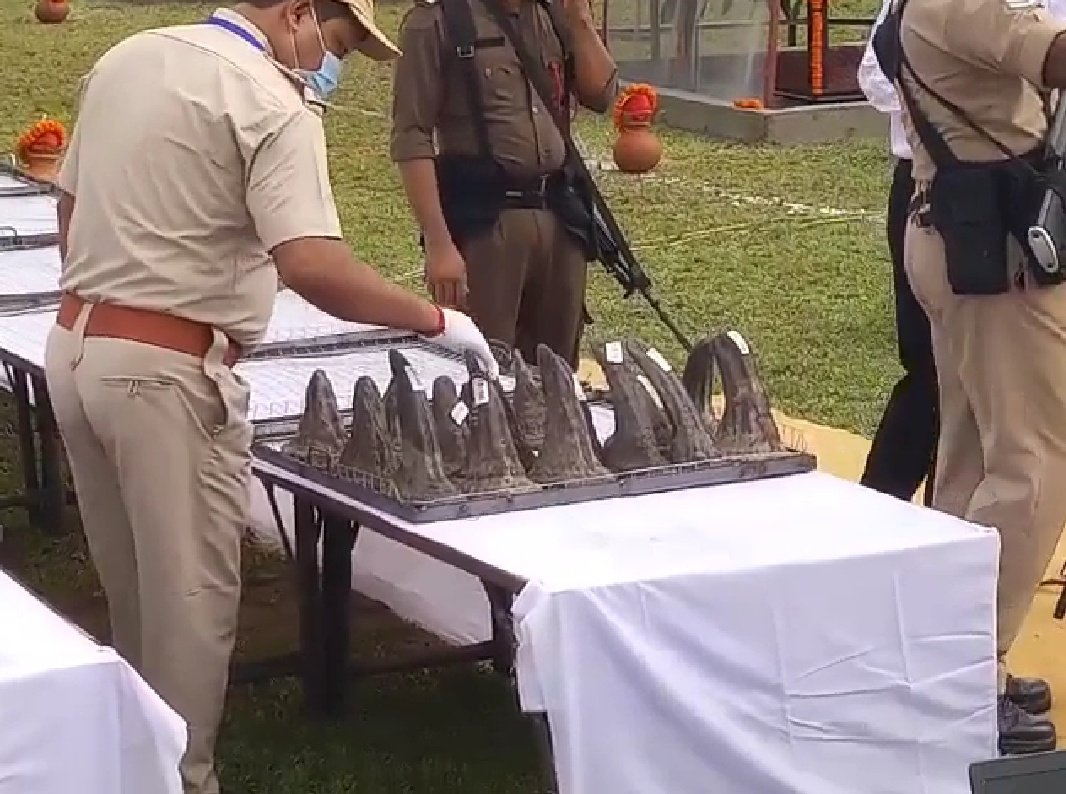 On September 16, the state cabinet has decided to destroy horns kept in treasuries of the state.
Of 2623 rhino horns, 2479 extracted from naturally or accidentally dead rhinos or confiscated from poachers, were burnt on the occasion.

The state government will also preserve 94 rhino horns based on size and soundness of architecture that will be showcased in a museum to be set up at Kaziranga National Park while 29 horns would be kept for ongoing court cases. 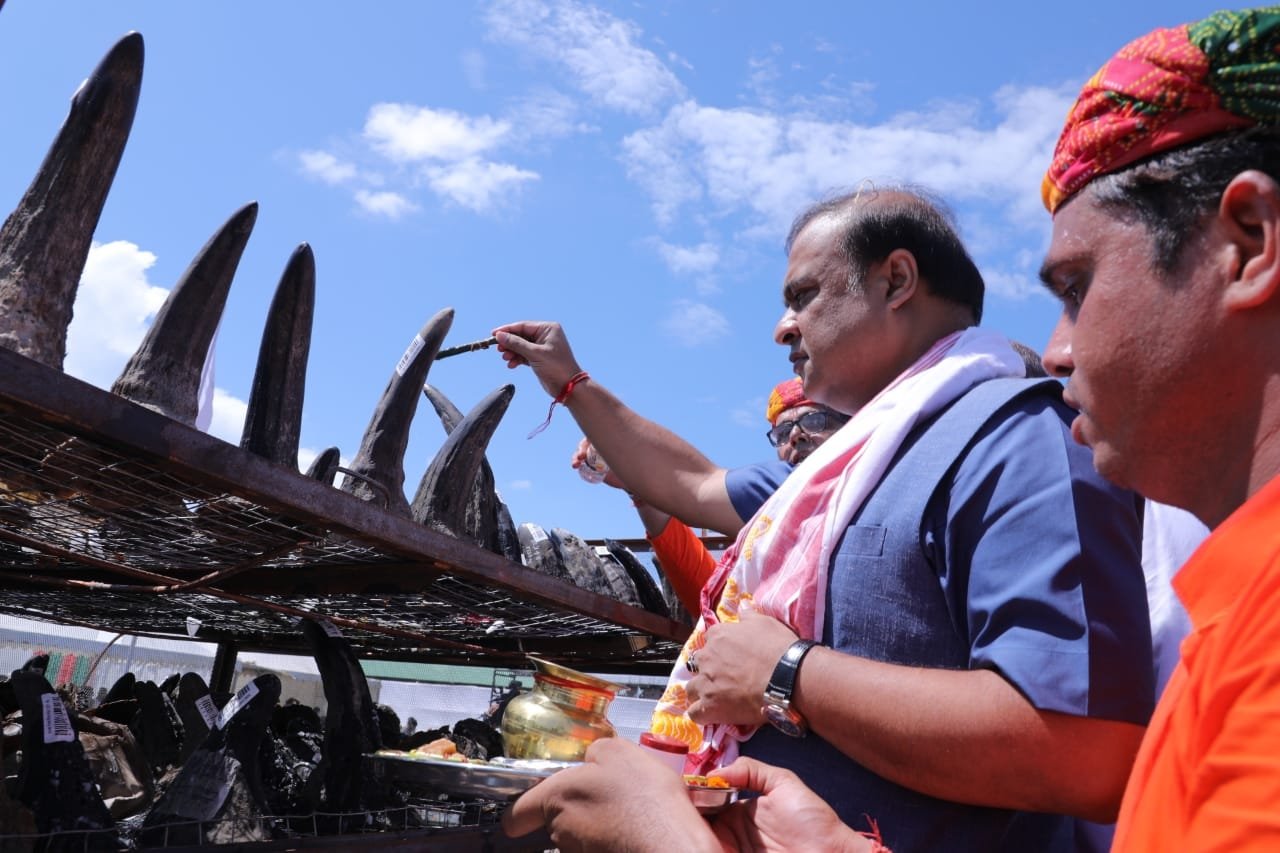 “Our government has taken zero-tolerance policy towards poaching of wildlife and due to our consistent efforts, one-horned rhinoceros population in Assam has increased from 1672 in 1999 to 2652 as per the 2018 census. With the first-of-its-kind event of destruction of rhino horns on such a scale in the country and the world, we intend to send a strong message against rhino poaching and reiterate our commitment towards wildlife protection,” Sarma said.

“Never before such a huge stockpile of one-horned rhino horns have been consigned to flames thus spreading the message loud and clear that rhino horns are no aphrodisiac and the myth has to be busted to put an end to the poaching of the majestic & magnificent rhinos once and for all,” forest minister Parimal Suklabaidya said.

“The exercise is a milestone towards rhino conservation aimed at busting myths about rhino horns,” Suklabaidya said. 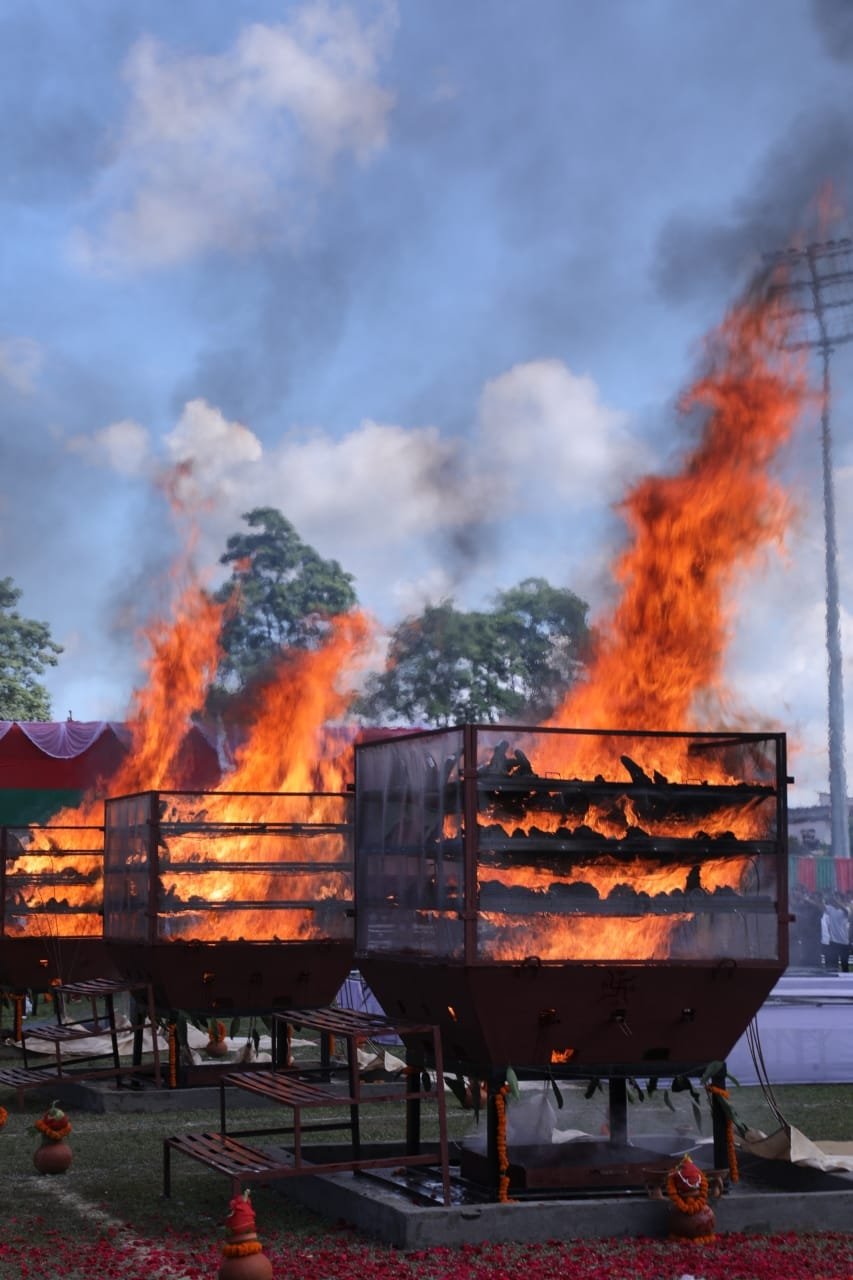 In a statement on Tuesday, Suklabaidya has said, “This is the largest public destruction of the stockpile of horns of the Greater One-Horned rhino and is aimed to propagate and reinforce the fact that rhino’s horns do not have any medicinal value.”