The Guwahati Municipal Corporation (GMC) in an order dated November 13 has banned therapy or massages by the opposite sex and provision of one by steam bath may be provided but in no case opposite sex shall assist in any way in the spas and unisex parlours.

Further, the license for unisex parlours, spas, beauty parlours, and hair cutting saloons in the city will also have specified conditions and guidelines.

The conditions include that there cannot be any exclusive rooms or chambers within the premises of the parlour, spas, and saloons. 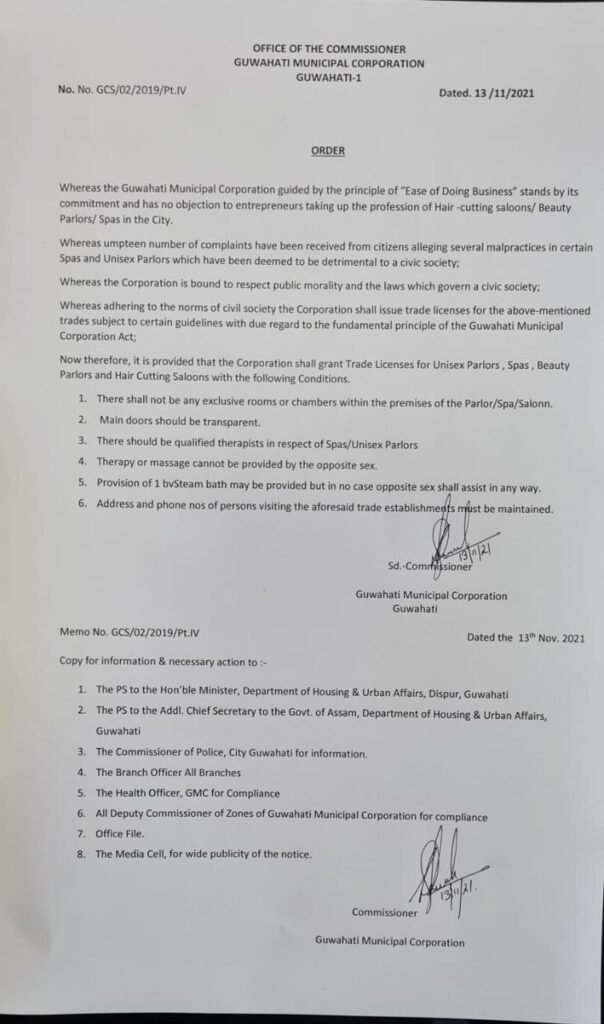 The main doors of these spaces should be transparent and qualified therapists will have to be appointed, the order read.

Moreover, contact details of all visitors and clients to the trade establishments must be maintained, the order added.

The decision to lay these conditions while issuing the trade licenses for the aforesaid establishments was taken as several complaints were receive from citizens alleging several malpractices in certain spas and unisex parlours which have been deemed to be detrimental to a civic society.

GMC also clarified that it has no objection to entrepreneurs in taking up the profession of hair cutting salons, spas, and beauty parlours and stands by its commitment of the principle of Ease of Doing Business, however, the Corporation is bound to respect public morality and laws that govern civic society, and hence, will issue trade licenses subject to certain guidelines.